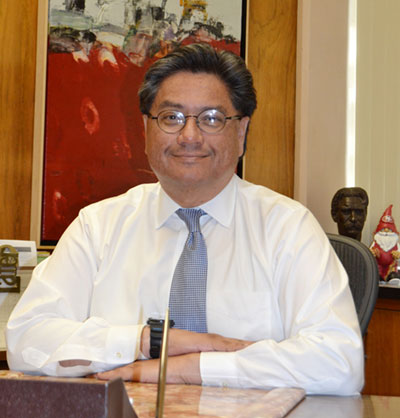 Almost exactly one year ago, Julio Fuentes began his new job as Santa Clara’s City Manager. And in his work over that year, Fuentes has shown that he’s up to the job. “It’s been a tremendous amount of work but it’s been inspiring and a lot of fun,” he says. “I’ve come to a city that’s very dynamic, with a lot of history and a of accomplishment – a community that’s thriving and alive and doing.”

Fuentes’ style is highly cooperative, and he’s ready to listen to any and all ideas from both citizens and city officials, and he describes that style with an apt metaphor for the 49ers new home. “It’s not about dropping back and throwing the ball, running down the field to catch the ball, and spiking it into the end zone,” he says. “It’s about getting everyone involved in the offense – getting more people involved in getting more work done.”

When he took over last year, Fuentes had no sooner hung up his jacket, than he faced the massive mess created in the wake of redevelopment agency dissolution. The shutdown immediately cut off $13 million in general fund lease revenue, and threatened to appropriate about $400 million worth of City-owned real estate – including the under-construction Northside branch library.

Over the last year Fuentes has turned a stonewall into a conversation – one that’s already settled a significant part of the RDA asset dispute. “We’ve already solved half those problems, and the city has returned money to taxing entities,” he says. “We’ve submitted proposals for [resolving the dispute over] the Northside library. The state controller has our proposal, and Assemblyman Bob Wieckowski has been working behind the scenes.

“Next we need to resolve leases on the properties,” he continues. “We’ve met with the county and we’re going to work with them.” Also, he notes, with other cities prevailing in litigation over similar issues, there’s reason for optimism.

“Council should be commended for exemplary leadership on this issue, and has been willing to be creative and work out solutions,” says Fuentes. “We’ve had very productive discussions with the state Controllers office and Department of Finance. They’ve been very helpful as well.”

Fuentes came to Santa Clara after 21 years as Alhambra City Manager and six years as Pomona’s City Administrator. A graduate of California State University, Long Beach, Fuentes holds a Master’s degree in Public Administration. He also served as the last president of the California Redevelopment Association, and government news website PublicCEO.com named him 2011 Official of the Year for his role in making Alhambra a business-friendly city with a growing economy, new community theatre, and fresh and appealing public art and “streetscaping.”

Northside is Exciting; But So is Balanced City-Wide Development

With Levi’s Stadium slated to open at the end of the year, and developers working feverishly to bring proposals forward for the biggest development project in Santa Clara history, Fuentes sees a one-time opportunity to put Santa Clara on the map as a regional leader.

“Related and Montana will give us the retail we should have as a leader in the region,” he explains. This is important because Santa Clara gets the largest part of its general fund revenue from sales tax. “What the city’s accomplished on the Northside is inspiring. Being able to participate in the stadium project – it’s kind of a dream come true.”

But more important than any one project is overall balance in Santa Clara.

“One thing I will emphasize over the years is balance – programs and services and development opportunities throughout the city,” he says. “We want to make sure we’re balanced in every aspect, and give every part of the city attention; ensuring that everybody’s neighborhood gets the TLC they need.”

He wants to make sure all parts of the city are equally successful, he says, and he’s looking for project opportunities throughout the city. “That creates synergy and a community that’s prosperous, stable, safe and appreciative of art and history.” 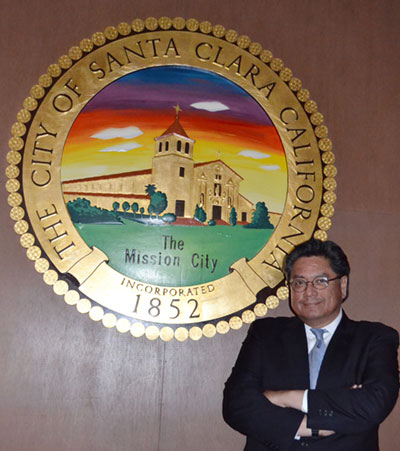 While some see the City’s center of gravity moving north towards the 101 corridor, Fuentes sees the historic downtown having, potentially, an equal pull. He’s planning to start on a revitalization plan for the Old Quad in the spring – as soon as the RDA dissolution issues aren’t commanding so much City attention.

With the city owning land in in Old Quad, Fuentes intends to work with SCU and other big owners in historic downtown on a revitalization plan. “We’re planning to bring major players together to develop a new downtown quarter and start developing a plan for bringing downtown back,” he says, and residents can expect to see some public discussion about different ideas later this year.

Fuentes vision is a Santa Clara downtown that won’t be a copy of anything else. “A place that will be unique to Santa Clara, for Santa Clara,” he says. “A place where the community comes together for a variety of events and activities, including art, culture and entertainment.”

However, he cautions that people shouldn’t look for a monolithic redevelopment project – which, it should be remembered, was what bulldozed the historic downtown back in the early 1960s. Instead, just as the El Camino is changing for the better bit by bit, so, too downtown will see a variety of diverse projects working over time towards a clear goal.

It’s been clear from many of the projects that have been moving forward, one of Fuentes’ top priorities is an El Camino Real that’s more worthy of its title, The Royal Road, and he notes many of the projects already underway including Gateway Village at Lawrence, Santa Clara Town Center at Scott, Presidio El Camino apartments, the Tuscany apartments, as well as Summerhill’s proposed residential development on the site of Russell’s Furniture and the long-abandoned El Real Nursery.

“Things are beginning to happen along the El Camino, but it’s going to take time,” he cautions. Already, there’s gardening work going on the medians, as well as replanted landscaping. Murals are planned for the Lawrence overpass over El Camino, as well as decorative street lighting and safer crosswalks. “We’re working with businesses on maintaining landscaping,” he adds, “and we will work with businesses on façade work.”

“When I look at Santa Clara, I see a city with a lot of housing stock, a good blend of single family and multifamily housing,” he says. “We want to make sure we have good, safe housing that’s affordable. As the years go by, we’ll have to work on that.” Infill development is of special interest to Fuentes, as a way to make home ownership more affordable for young families. In addition, he says, planning needs to take into account young people’s preferences today for urban and transit-oriented living.

Fuentes’ goals may seem all over the board. But there’s a single thread that connects it all, a piece of advice Fuentes received from a mentor early in his career. “Give the taxpayers a visible return for their investment.” That pretty much says it all.