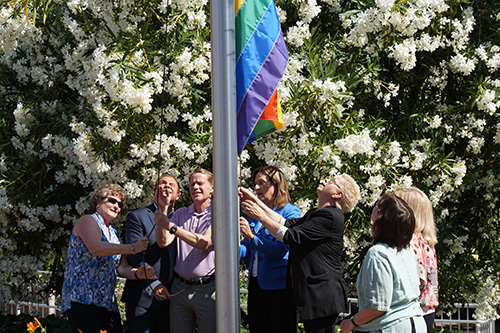 At the June 13 Council Meeting, Council recognized June as LGBTQ Pride Month. The proclamation can be viewed on the City Website.

“You’re not free unless you’re equal,” said Caserta. Caserta also said that he was the “brains behind the operation” to push the Pride Month proclamation forward.

Antolovich stood, head held high, and thanked everyone at the ceremony for their support and for helping her community feel like they have a family in Santa Clara.

“Who knew that California, Santa Clara County and the City of Santa Clara would support us?” said Antolovich.

June is also well known to have Pride Celebrations across the World. June is such an important month for the LGBTQ community due to the historic Stonewall Riots on June 28, 1969 which lead to LGBTQ civil rights movements.

The Pride Month proclamation and flag also serve as a reminder that in 2012 former Councilmember Jamie McCloud lead Santa Clara to adopt Ordinance No. 1899. The ordinance is in place to protect and safeguard the right and opportunity of all persons to be free from all forms of arbitrary discrimination, including discrimination based on age, race, color, creed, religion, national origin, ancestry, disability, marital status, sex, gender, gender identity and sexual orientation.

The colorful and momentous flag will fly everyday through the end of June. The flag at City Hall joins another rainbow flag that flies every weekday at the County Office in San Jose. Yager said he was confident that the flag will continue to fly.