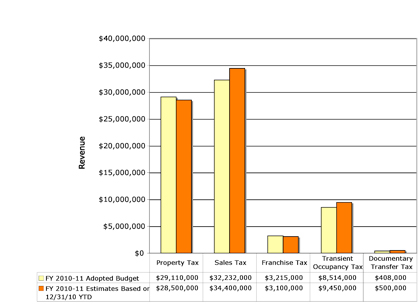 Santa Clara Finance Director Gary Ameling voiced cautious optimism about city finances at the March 29 City Council meeting. At mid-year, some of the city’s funds are growing for the first time in several years, Ameling said, and income is $4.2 million above budget as a result of growing sales and transient occupancy taxes and city rent revenue. Further, expenditures appear to be on budget, and Santa Clara may be able to contribute to its depleted reserve fund this year.

But don’t start the celebration just yet. A cloud in the form of declining property taxes – for the second year in a row – shadows the upbeat picture. This year the county’s assessed valuation – the basis of property taxes – for Santa Clara dropped 3.2 percent. That decline adds up to about $600,000 less for the city’s operating fund.

Interested in Santa Clara’s financial picture? Important City Council discussions are coming up in the next months as budgeting gets underway for fiscal 2011-2012:

All meetings are held in the City Council chambers and start at 7:00 p.m. For more information, visit santaclaraca.gov. Santa Clara’s mid-year financial report is available in hard copy at the Central City Library and online by going to sireweb.santaclaraca.gov/pubmtgframe.aspx?meetid=990&doctype=AGENDA, and clicking on Agenda item 5.B.

City Politics
Author David AlexanderPosted on May 25, 2022
At the May 24, 2022 Santa Clara City Council meeting, the Council discussed whether to allow PAL to continue managing the City’s BMX track....