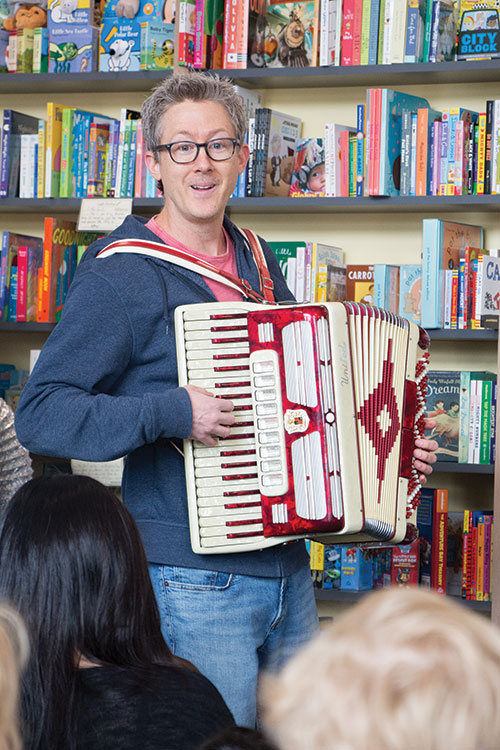 “When I moved to California about six years ago, mid-northern California was pretty much what I expected it to be,” said McCanna to a room full of children and their parents at Santa Clara’s Books, Inc. during its March 19 story time. “You got some fog in the mornings and beautiful creeks along the trails and ponds and within a couple of years they all dried up. We were just shocked at how we weren’t getting any rain so we went for about five years here in California through what’s called a drought. It’s when you don’t have very much water at all. So I was trying to come up with new ideas for stories and I was thinking about how much I missed the sounds of water whether it was from raindrops or creeks or ponds and so I started thinking about all the sounds that water makes and I made a list of all those sounds and turned them into a story.”

The book, which debuted in January, is full of words, when said aloud and with various inflections, sound similar to the bubbly, gurgle of a brook babbling as it flows.

In addition to reading Watersong, McCanna performed songs on his ukulele and accordion, and read his book, Bitty-Bot.

“When I was about six years old,” McCanna explained. “A movie came out called Star Wars … There are two robots called C-3PO and R2-D2. I loved those robots when I was a little boy. When I became a children’s author one of the first things I knew I wanted to do was write a book about robots so I set out to write a book about robots and I did, and it became a real book.”

In contrast to Watersong, Bitty-Bot tells the tale–in the rhyming fashion of many children’s books–of a robot who chooses to go on a space adventure instead of drifting off to dreamland.

Once the stories and songs ended, McCanna took questions from the audience, disclosing information about his life before writing books–he wrote a children’s musical called Cosmic Calamities of Henry Noodle-and how he became an author – he fell in love with the art form and decided to see what would happen if he wrote a picture book.

Despite not every story turning into a success, McCanna eventually wrote his first published book, Teeny Tiny Trucks, in 2013 and Bitty-Bot last year. He’s currently working on, among other projects, a sequel to Bitty-Bot, Bitty-Bot’s Big Beach Getaway, which will be released next year, and he promised to return for another story time and book signing to share the story of Bitty-Bot’s ocean adventure.

Additional information can be found at www.timmccanna.com.