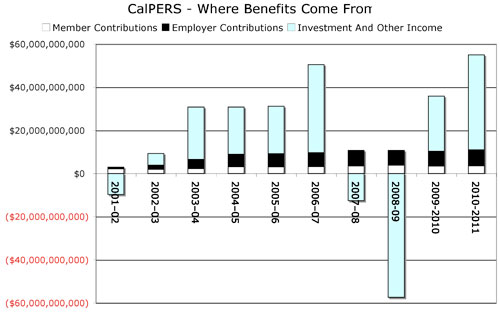 About a year ago, California Governor Jerry Brown proposed changes to California’s 80 year-old public employee pension plan. One provision of that proposal is investment-risk sharing.

The reason this is important is that currently CalPERS funds retirement benefits largely with return on its nearly $240 billion investment fund. Employer and employee contributions account for less than a quarter of CalPERS’ income.

“Even with the bad years, most of the money put into the plans comes not from employee and employer contributions, but rather from investment return,” explains Santa Clara Director of Finance Gary Ameling. And currently, employee contributions (as a percent of salary) stay constant regardless of fund performance.

One might think that kind of exposure to risk would make CalPERS managers cautious. They may be now, after the economic collapse began in 2000. But 12 years ago, CalPERS apparently assumed the booming dot-com – private sector – economy would return a free lunch for public pensions.

In 2000, CalPERS was “super-funded,” at 118 percent of its liabilities. So the fund kept contribution rates artificially low with “payment holidays” during 2001-02 and 2001-03, explains Ameling.

Since then, CalPERS has changed the rules and payment holidays are things of the past. But the impact of those losses will be felt for many years to come.

For more information about CalPERS, visit www.calpers.ca.gov. For the details of Governor Brown’s pension reform plan, go to gov.ca.gov/docs/Twelve_Point_Pension_Reform_10.27.11.pdf.

City Politics
Author Jacob BournePosted on September 25, 2020
Following a zoning administrator’s denial of a minor modification as part of a home addition project for a single family home at 2133 Santa...