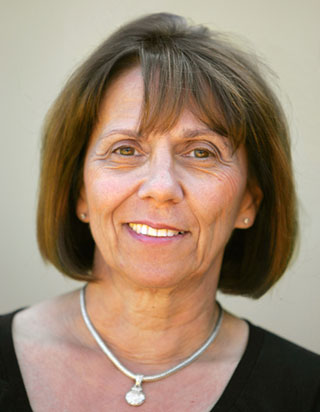 Owen, born March 4, 1944, in New York City, died unexpectedly in her sleep at her home in Portola Valley on July 27, the date of the 45th anniversary of her marriage to Larry Owen and just a year after she retired.

Of the 300 attending the services, some travelled from as far as Massachusetts and Colorado to celebrate Owen’s extraordinary life and career as a teacher for 46 years, from 1972 to 2012 in the Santa Clara Unified School District, where she served as English Department Chair at Wilcox from 1979 onward. Owen was named SCUSD Certificated Employee of the year in 2004. She was a supervisor in the Stanford University Teacher Education Program.

Speakers shared poetry and stories of Owen’s joie de vivre and of how she inspired them to reach for the stars.

“Her joy was in encouraging others. She makes others believe in their strengths and dreams more than they do,” says colleague Jeff Muralt.

“She was so much more than our teacher. She was a mentor, friend, witness, cheerleader, nurturer. She came to our weddings and graduations. We were her unofficial adoptees. She made us feel like each of us was so special,” says Jenni Katajamaki.

“Mrs. Owen saw my potential and really pushed me to do better. She would even throw stress-free parties for us,” says 2003 graduate Manki Wong.

Kaushal Singh and Usha Rani, his wife, represented their son, Babu Singh, in Boston. “Mrs. Owen helped Babu even after he graduated. He feels he owes part of his success as a medical doctor to her. Our entire family is thankful to Mrs. Owen. She will always be with us,” says Singh.

“Even with her death, Joan continues to inspire and…drive us to be better, more compassionate people, who listen to, support, and encourage each other despite how busy we might be,” writes colleague Kristin Traudt.

“As we look to the sky for guidance, we want your star to be there,” reads Wilcox campus security guard Creighton Lane from a poem he wrote honoring Owen.

Community
Author Diane AndrewsPosted on October 22, 2020October 22, 2020
It’s not every day that Paul Fry and his wife, Gretchen Simpkins, see a man and two mules casually clopping down the sidewalk along...