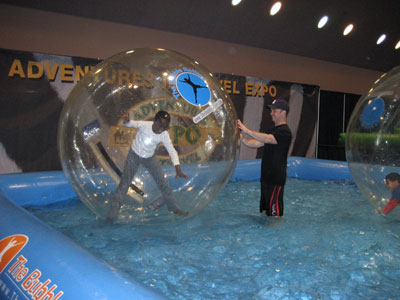 “It’s kind of scary. But that’s the point, isn’t it?” said Nate with Redwood Canopy Tours as he hooked up a hesitant mom to a high wire for a free zip-line ride at the two-day Bay Area Travel & Adventure Show last weekend.

Not to be outdone by her daughter, who had gone first, the woman bent her knees and pushed off a high platform inside one of the ballrooms at the Santa Clara Convention Center. It was a leap of faith for a short but exhilarating zip-line ride above the ballroom floor.

Zip-lining was but one of many active and informative show opportunities to whet one’s appetite for adventures from as nearby as Silicon Valley to as far away and exotic as Turkey, which was proclaimed a travel destination must-see by the featured presenters.

“If you care about your loved ones, take them to Europe tomorrow. Go and find out what the world is really like,” says featured presenter Rick Steves, travel guru and author of Europe Through the Back Door. “It’s safe to travel. Statistically, it’s eight times safer on the streets of Europe than the U.S….and I love Istanbul!”

Eight hundred people—many standing or sitting on the floor—listened to Steves’ advice on everything from jumping the line at the Eiffel Tower (make a reservation) to traveling light.

Many returned for his second presentation, “Travel as a Political Act,” which also is the title of his 2009 book.

“There’s more to travel than good-value hotels, great art, and tasty cuisine,” he wrote. “Americans who ‘travel as a political act’ can have the time of their lives and come home smarter—with a better understanding of the interconnectedness of today’s world and just how our nation fits in.”

“Through travel, you humanize the rest of the world and come home with empathy for the world. Be mindful in your travel. It’s a choice,” Steves tells the Travel & Adventure Show crowd.

“The destination is special, but what makes it really special is the people themselves,” she says, telling anecdotes and showing photos on the giant stage screen of as many of the 1,000 must-see places in the world as she could pack into an hour.

Europe—from Paris, Brussels, and Bruges to Venice—appeared. Then Russia, countries in Africa, China, and India. Schultz saved Turkey for last.

“Turkey is a must-see destination that is in both Asia and Europe,” she says.

“Turkey has more history than any other country by far and smiling faces—people happy to see you. They love Americans,” says presenter Bora Ozkok, president of Cultural Folk Tours International (www.culturalfolktours.com).

One day wasn’t enough time to see and do it all at the Bay Area Travel & Adventure Show.

“There are so many things to do here. That’s why we came,” says Sugyan Samantaray, at the show with her husband, Manoj Dani. “We enjoyed it. We’d come again.”

“This was a fun day, wasn’t it? To see what possibilities there are,” remarks one of four friends leaving the show at day’s end Saturday.