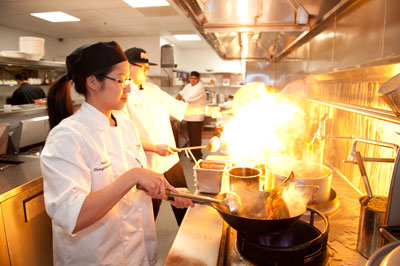 “I want [people] to come here and feel comfortable, to not feel that this is a place where they have to be proper and watch their table manners,” said Executive Chef Pailin Chongchitnant, a native of Thailand. “I want them to order the food and eat the food comfortably, hence the family style serving, without having to worry about courses, using the right utensils and things like that. And, [I want them to] leave feeling like wow that was a good meal…Every detail in the restaurant is geared toward having people come in and feel good to be here.”

Prior to heading up Oryza’s kitchen, Chongchitnant managed the back of the house at Coriander and when the restaurant’s owners approached her with the proposition of creating her own menu and becoming the executive chef, she jumped at the opportunity to create authentic Thai fusion cuisine.

“The flavor was the most important to me because I think whether it’s traditional or fusion, if it’s not good it doesn’t matter. And if it’s good, whether it’s traditional or fusion doesn’t matter so I think the concept of the food is what sort of intrigues people and gets them sitting and ordering and gets them through the door but what’s going to keep them coming back is if it’s good. So my goal was to use good, quality ingredients and no added MSG and try to make everything from scratch as much as possible,” said Chongchitnant.

Without hesitation, Chongchitnant claims the 5-Spiced Braised Beef Short Ribs dish is her favorite. “It’s a take on a traditional dish, which is a five spiced braised pork in Thailand and it’s usually served with Chinese broccoli, and a boiled duck egg. So here I used beef short ribs, a medium boiled egg, and bok choy. The flavor of the sauce is similar but the consistency of the sauce is a little different, it’s richer,” said Chongchitnant.

She is also excited about her pad thai dish. “The pad thai we have is the most authentic pad thai you will ever find and I say that with pride,” said Chongchitnant. “I’ve been to a lot of Thai restaurants and the pad thai they have is generally orangey red in color and tastes good but it doesn’t taste real. Real pad thai has some distinct ingredients – dried shrimp, sweet pickled radish, shallots, garlic and tamarind…I wanted to make sure our pad thai is as authentic as possible.”

Yelp reviews have been mostly favorable for the newly opened restaurant. “I’m pleasantly surprised at the level of commitment of our staff. The cooks, the managers, the servers, I mean, they’re so excited about this place and they’re not even a part of the investors and the owners, they’re just people who work here but they’re so excited about it. I see our employees back here to eat with their friends because they want to bring their friends here…When you see your own employees come here with their friends you know that they think it’s good and they want other people to know about it and I think that’s one of the most important things is if your employees believe in the restaurant, you’ve done a good job because your employees know most about what goes on in the restaurant. There’s nothing you can hide from them. And if they’re excited to be here then we’re off to a good start,” said Chongchitnant.

The name Oryza comes from the genus of the word rice and was chosen for its relevance to the type of Asian fusion cuisine served at the restaurant, which is open seven days a week from 11 a.m. to 9 p.m. which extended hours on Friday and Saturday to 10 p.m.

For additional information or to view Oryza’s menu and see a list of its unique beverage offerings, visit www.oryzabistro.com.

Getting To Know Gloria Citti: An Inspiration to the Community

Business
Author Erika TownePosted on July 11, 2022
The pandemic was a lot of things to a lot of people. For Sunnyvale’s Carla Duharte, founder of Fozzie’s Kitchen, it was the beginning...
SPONSORED