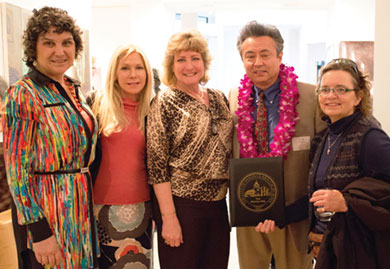 The Triton Museum of Art’s Executive Director and Senior Curator George Rivera has a long history with the arts community. He’s a mentor, teacher, artist, and has been serving the City of Santa Clara at the Triton for over 25 years. Rivera’s work and career was honored by Arts Council Silicon Valley when he received the 2013 Legacy Laureate Award on March 28.

“He really deserves it,” said Triton’s Curator of Education Maria Ester Fernandez. “He’s a mentor and I think, above anything, he’s someone who has been in this business for over 25 years. He started at the bottom and he’s worked his way up. He always looks at who’s coming up behind him and he brings them up with him. He wasn’t climbing to the top at the expense of others. He was bringing them up with him. He’s been a great mentor to me and he’s just so generous. It’s very well deserved.”

In addition to receiving a $5,000 cash prize and ACSV’s top honor, Rivera was also given a proclamation from the City of Santa Clara, presented by councilmembers Pat Mahan, Debi Davis and Teresa O’Neill.

“I just got used to the fact that I was getting the legacy award. But the city proclamation, I wasn’t expecting that,” said Rivera during his speech. “And I’m usually pretty good at looking at things from all angles and all sides and possibilities…A lot of people made this happen. I wanted to thank and recognize two people particularly who had the vision and they’re in the audience today. I want to thank former executive director Jo Farb Hernandez and her team and the board, which includes lifetime trustee Rosalie Wilson, who made this happen. My whole life I’ve been blessed with mentors and examples to follow and I’m extremely fortunate to have crossed paths with these individuals throughout my life…There’s a mentor today that I mentioned her earlier and I just want to acknowledge. Rosalie Wilson…has perhaps been my greatest champion here at the Triton for my 28 years here…A lot of people helped me so I thank them: My wife, Kristin, my rock; my father in law, Clint Lindseth – another mentor who has taught me a lot about maturing with grace and to lead by example for my three daughters. I thank him for that…Young people need [mentors]. I spoke to the emerging artist recipient laureate [Robert Ragazza] and I thanked him for what he’s been able to achieve at this point. I hope that he will follow the path of the other laureates, because the reward for contributing back with others to build a community is something that’s hard to describe but it will make your life worthwhile…I want to thank the Arts Council for this tremendous, greatest honor I’ve ever received.”

Rivera was selected to receive the award based on his lifetime of achievements and impact on the community.

“It’s such an honor for him and it’s an honor for the hard work that he’s put in for the museum,” said Rivera’s wife and colleague Kristin Lindseth-Rivera. “And it’s been weekends, evenings and all hours. It’s been a long and very wonderful journey…The award came because of his art work. They wouldn’t give the award to someone who wasn’t actively creating. They went to see his 30 year survey and they were blown away by the work. And the quote I got [from Arts Council Silicon Valley] – which was so funny, I laugh every time I see it…[was that] their jaws dropped in the first room and their jaws dropped even further when they got to the second room, which caused pressure which caused their eyes to pop out. Once they got to the final room they were just blown away.

“His work is very powerful and it causes people to feel very connected…I’m really proud of him for all of those things, but most especially for the wonderful human being that he is, because he always takes the high road in any circumstance,” she continued. He’s the person I admire most in the world, along with my own parents, and I’m so honored to be on the journey with him.”

Additional $5,000 cash prizes were given to Daniel Hughes (On Stage), David Denny (Off Stage), Sam Hernandez (Off the Wall), Don Fritz (On the Wall) and Ragazza (Emerging Artist). For more information on ACSV visit www.artscouncil.org.