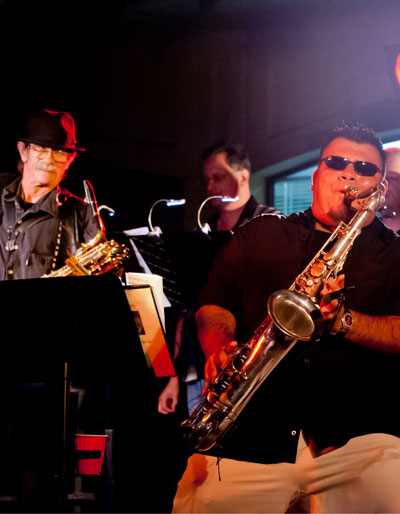 Santa Clara is a city known for traditions. One of the city’s annual traditions took place on Friday night, August 3, namely the annual Street Dance. As in past years, Franklin Square was packed with throngs of happy concertgoers and dancers.

Food booths, kids’ games, beer and wine, political campaigns and local organizations were all on hand to offer a variety of things for everyone to do. And as in past years, everyone had a great time; proving once again, that the City’s Cultural Advisory Commission knows how to put on a great event.

The Silicon Valley Houserockers were the band of the evening. The Los Gatos-based band advertises itself as one of the hardest working bands in Northern California and everyone in attendance could tell. Right from the very first note to the last strum of the guitar, the Houserockers put on quite a show. &I’ve been coming for years and this is definitely the best I’ve ever seen,” exclaimed Tammy from San Jose. Tammy and the rest of her friends spent the night dancing and swaying to the music.

Others shared her sentiment as well. “I used to come out for the Joe Sharino Band. I love them, but I think the Houserockers are really good. I guess you can say I definitely have a second love,” said Cheryl. “I guess I can’t be jealous since being second isn’t all that bad,” joked Cheryl’s husband Bill. “The band is really good – I’m more of a Blues fan, but you don’t typically see that much brass (musical instruments) in a rock band, so if it makes Cheryl happy, I’m happy.

Winners of KFOX Radio’s 2010 Last Band Standing contest and named the “Best Cover Band in the Bay Area,” the Houserockers are a 10-piece Rock & Soul band playing a wide variety of songs with something for everyone. Hits from Tower of Power and Huey Lewis and the News, were just some of the songs that made Franklin Mall the center of Santa Clara.

But the Street Dance isn’t just a chance to rock the night away. South Bay Church continued their tradition of helping out. Sporting red t-shirts adorned with “I Love My City,” church members ran a variety of booths to keep the young and the young-at-heart entertained. The City’s Chamber of Commerce members, who also had a petition to save the Franklin Square Post Office, sold soda and water. Beer and wine were sold along with tri-tip sandwiches, spicy Neto’s sausages – with sliced jalapeno peppers for those who wanted to make the spicy link even hotter and kettle corn.

The annual Street Dance is sponsored by the City’s Cultural Advisory Commission and is made possible by the hard work of Santa Clara employees and dozens of volunteers. For more information on the street dance, contact the Cultural Advisory Commission at 408- 615-2220 or by email: CulturalCommission@santaclaraca.gov. For more information on the Silicon Valley Houserockers, please visit their website, www.svhouserockers.com.