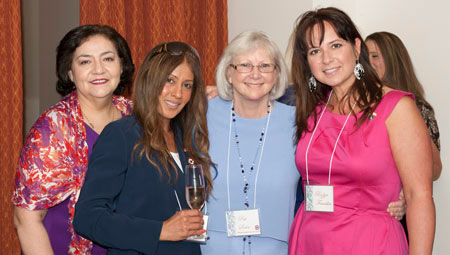 To a mother, Mother’s Day has a definite meaning: having her children by her side, or knowing that they’re safe and secure. However, for a mother whose child is serving in the military, Mother’s Day takes on a different meaning. For these mothers, the day often means worrying about her child’s safety, especially so when he or she is serving overseas. To honor military moms on Mother’s Day, the South Bay Blue Star Moms held the ninth annual “Adopt a Military Mom for Mother’s Day” brunch at the Fairmont Hotel in San Jose. Blue Star Moms (mothers of children serving in the military), Silver Star Moms (mothers of children wounded while serving in the military), and Gold Star Moms (mothers of children who have lost their life in battle) attended the event as well as high-ranking officers, wounded warriors, and Pat Soler, the national president of Blue Star Mothers of America. Military members on leave were able to escort their moms to the event.