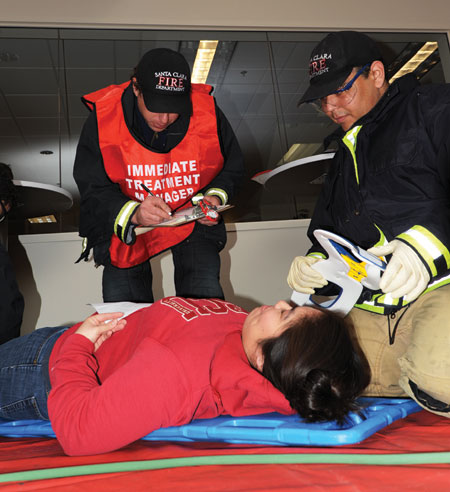 The day had started like most other days, but it would end in a way no one could have predicted. A person armed with a gun entered the building and shot 14 people. Three people died at the scene; the others had a variety of injuries ranging from mild injuries to paralysis. The shooter was being apprehended by the Santa Clara Police Department (SCPD) and the building was being secured. Meanwhile, several units from the Santa Clara Fire Department waited for the all clearî to be declared so they could enter the building and help the survivors.

The events in this scenario never actually occurred; they were the script used for a Mass Casualty Drill that provided training for the Santa Clara Fire Department (SCFD) and Santa Clara University Public Safety staff. According to SCFD Captain Scott Sorensen, the skills used, learned and reinforced at these drills all translate to different areas. The main difference is that if this was a real incident, mutual aid (where units from other cities assist) would be utilized. The focus will be on efficiency and, overall, it will be a practical learning experience.î At each session, a group comprised of approximately one-third of the fire department received training over nine nights in February and March.

With the volunteers assembled in one room, Captain Sorensen explained the premise of the exercise and what would happen. The scenario is that the SCPD has declared the building safe and has apprehended the shooting suspect. First the fire fighters and paramedics will assess the injuries and start a triage to categorize the injuries into three categories – moderate, severe or dead.î According to Merriam-Webster’s dictionary, a triage is the sorting of and allocation of treatment to patients and especially battle and disaster victims according to a system of priorities designed to maximize the number of survivors.î Although it might seem like an uncaring method, in a mass-casualty situation, a triage system is the best way to help the survivors, given a limited amount of resources. The volunteers were assigned different roles – ranging from being dead on scene, to being unresponsive and unable to follow commands, to being shot in the abdomen and paralyzed and unresponsive after 15 minutes.

The purpose of the variety of the injuries was to help the fire fighters and paramedics reinforce training they already have received. It also gave them a chance to try out some new equipment to see how it could be utilized. The building chosen presented some different situations that might not normally be encountered in a classroom setting.

The entire drill lasted approximately 20 minutes and during the debriefing, Captain Sorensen explained, In a lot of ways, a real event will actually be easier than a drillî since a drill doesn’t have the urgency that a real life situation brings. During the debriefing, the firefighters and paramedics discussed what worked and what didn’t as well as what problems or questions they encountered.

Santa Clara Police Serve it Up for Special Olympics