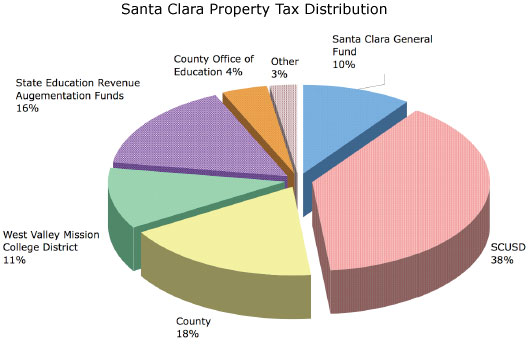 You might be surprised at just how little of the property taxes paid by Santa Clara residents actually go into the City’s general fund. This raises the importance of redevelopment funds for the capital investments needed to foster and maintain a thriving community.

The chart below shows how each dollar of property tax revenue collected in the City of Santa Clara is distributed among city, county, and state agencies. The SCUSD gets the single largest share, followed by Santa Clara County. The city’s general fund is third from last – its share outpacing only the County Office of Education and “other.”

These distributions have evolved over the years, often as a result of California’s perennial crop of sledgehammer citizen legislation –ballot initiatives – and the legislative contortions required to implement them. Unsurprisingly, the end result can be entirely contrary to intentions.

Take, for example, “educational revenue augmentation funds” – ERAFs. They sound like money given to schools. In fact, ERAFs end up being money that is taken from schools. Here’s how this fiscal sleight of hand works.

Two decades ago, in 1988, California voters attacked the problem of declining school funding by passing Proposition 98, mandating that 40 percent of state funds be spent on education. This problem itself had its roots in another surgery-with-a-sledgehammer ballot initiative, Proposition 13, freezing property taxes, which were at that time the primary source of municipal and school funding.

To meet Proposition 98’s requirements in the face of a 1992 state budget deficit – sound familiar? – the state shifted partial responsibility for education funding to local governments (cities, counties and special districts). Sacramento then directed county auditors to shift the allocation of local property tax revenues from local government into ERAFs. However, when the money returns to schools, it’s earmarked for specific purposes.

The League of California Cities (www.cacities.org) estimates that this year ERAFs will divert $7.5 billion of local revenue across California.